As a California native, it was only a matter of time before I found my way back home. Not long after graduation, here I am in San Francisco, some eight hours north of where I was born. If you are a soon to be a graduate and are debating where to go after receiving your diploma, here are three reasons why you should start your career here 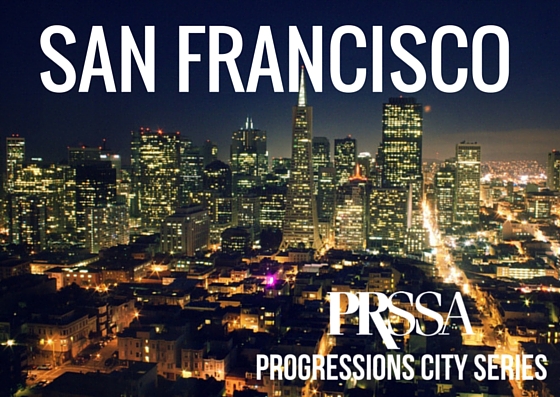 In terms of professional development opportunities, PRSA and PRSSA both have a strong presence here in the Bay Area. Universities that have a PRSSA Chapter include:

In terms of PRSA, you can either be a member of the PRSA San Francisco Chapter or PRSA Silicon Valley (PRSA-SV) Chapter. A benefit of having two Chapters within such a concentrated area is that there are always plenty of networking activities to choose from in a given month. One of my favorite events that PRSA-SV sponsors every summer is the Inside the Newsroom series. Once a month, PRSA-SV will bring in a reporter or two from a top tier publication, moderate a panel discussion and then open it for questions from the audience. As a matter of fact, I recently attended one with Marco Della Cava and Jon Swartz from USA Today.

If you like technology, the Bay Area is the place for you. Facebook, Google, Apple, Twitter and LinkedIn all call this area home. Even if you aren’t working for a Fortune 100 tech company, tech is very much a part of the culture here. Agencies in San Francisco and Silicon Valley for example, primarily have tech clients.

If technology isn’t your thing, don’t rule out the city completely. As mentioned above, there are plenty of non-technical jobs and internships out there. Even if you do find yourself accidentally immersed in tech, take advantage of the situation and learn as much as possible. I have actually enjoyed learning about topics such as DMARC and WebRTC. For everyone’s reference, DMARC helps email senders and receivers identify spam and phishing messages. WebRTC, which stands for Web Real Time Communication, makes the voice calling and video chat features of Skype possible.

There is never a dull weekend in San Francisco. Are you a foodie? From burritos to sushi and everything in between you’ll be sure to have your fair share of Instagram worthy posts. Do you love being outdoors? San Francisco has so many great trails for hiking and biking, beautiful beaches and hidden parks. Having grown up in Seattle where it rains a lot, I find myself soaking up the sun as much as I can. Do you like music and entertainment? With some of the biggest names in music, like Taylor Swift, to local indie rock bands, concerts happen all the time.

Have additional questions about public relations and San Francisco? Where would you like to see the next City Series post be? Share your thoughts in the comments below.

Ethan Parry is an account coordinator at Eastwick Communications. He served as the 2014–2015 PRSSA National vice president of public relations. He is a member of the PRSA Silicon Valley Chapter and New Professionals Section. He currently serves as the public relations chair for the Social Media Club San Francisco Chapter. Connect with Ethan on Twitter @ethanparry3, through his LinkedIn page or email him at ethan.david.parry@gmail.com.