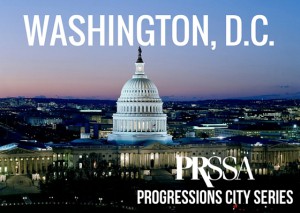 For someone who never planned to make a home in the Washington, D.C., metro area, I’ve been here an awful long time — 12 years and counting. Here’s a secret: D.C. was never high on my list of places to live. I had nothing against it, it simply didn’t make it onto my radar screen. But my husband’s desire to serve his country a second time (he’s a veteran) brought us here. Now, both of us have lived here longer than anywhere else at one time, including our hometowns.

When I moved here, the D.C. public relations scene was nowhere near as varied as it is now. Back in the day, there were just a handful of professional development associations, and it was actually possible for you to attend events organized by each without needing to clone yourself. Public affairs and health care practitioners abounded, whether at agencies or nonprofits. Consumer and lifestyle work was hard to come by, and tech public relations was highly niche.

What a difference just a decade or so makes. Today, you can avail professional development opportunities via multiple organizations, with newcomers like ColorComm (disclosure: I was on the founding board of directors) as well as stalwarts like WWPR rapidly growing their ranks.

Public affairs and health care still predominate, but D.C.’s tech and startup scenes are vibrant, thanks in no small measure to a strong community of early adopters whose passion powered their growth. Their efforts did not go unnoticed, with several local and federal governmental initiatives following suit.

“Twenty years ago it felt as if the media and public relations were centered in New York. In 2016 it feels quite the opposite working here. Most organizations need a public relations perspective that encompasses legislative-minded strategy, and most media have a bureau or employee based in the region. There are also many start-ups in a hugely diverse number of sectors that have contributed to the growing public relations landscape.”

Whether or not their work is connected to the federal government, area professionals agree it’s a large part of what makes D.C., well, D.C.

“For such a small city, you get swept up by the excitement of working close to projects that make national headlines, or the possibility of bumping into famous Feds,” said Elise Perkins, owner, ep communications.

For those aspiring to work in nonprofit or advocacy organizations, the D.C. area has a wealth of opportunity. As Lauren Lawson-Zilai points out, “there are plenty of public relations agencies that work solely with mission-driven organizations.” Lawson-Zilai should know; she’s the director of public relations and national spokesperson for Goodwill Industries International.

While the District (as we locals and suburbanites refer to it) doesn’t have the glitz and glamour of its relatively close big sister New York City (less than three hours by train), it has its share of image-conscious companies and professionals. It is, after all, our nation’s seat of government. And there’s nothing as small town as a big city.

As Mercy Chikowore, executive director of ColorComm D.C. pointed out, “D.C., let alone the public relations community in D.C., gets really small really fast. So [if you’re looking to move here] be sure to build meaningful relationships and cultivate them like your career depends on it.” It’s not a one-way street, though, as Perkins noted: “I’ve found that most people in D.C. are genuinely willing to help others.”

Quick tips for those trying to break into the D.C. public relations market:

I’ll end by echoing my colleagues: public relations opportunities in D.C. abound, and the community is extremely welcoming and helpful. But you have to take the first step, whether you’re job-hunting long distance or in your own backyard. And if you make it here: look us up! We’re a friendly bunch, I promise.