Undoubtedly, you probably already have an opinion of New York City. Maybe you’ve visited and seen the tourist sights. Maybe you’ve never been but know you’d love it or hate it. Maybe you think that “Seinfeld” and “Sex And The City” are documentaries.

The truth is—New York City is what you make of it.

I wasn’t born here, but neither were most people who call NYC their home. This great city takes people in for as little or as long as they want. But what you should know is that NYC is unlike any other city, and the opportunities are myriad. 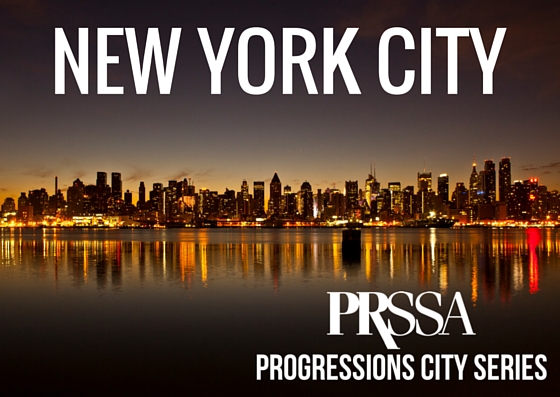 For several reasons, I consider NYC the spiritual heart of the public relations industry.

First, New York perfectly suits agency life. To be a great public relations practitioner, you have to know a little bit about many things. You must have a breadth of knowledge that will allow you to react quickly to a client request, a journalist’s question or an unexpected issue. Simply being in NYC, you are exposed to so many people, ideas, industries and cultures that it forces you to get smarter every day. In many ways, the key to success in the agency world are the same qualities that help you to live and thrive in NYC. It is also beneficial that the largest agencies are either headquartered or have a presence here, and there are countless medium and small agencies (like mine!) to choose from.

Second, global industries are either centered in or based around NYC. The Finance and fashion industry have the highest profile, but the city and its entrepreneurs have turned “Silicon Alley” into a legitimate counterpart to the innovation that is happening on the West Coast. The Ad Tech sector is also booming because it’s the perfect combination of old line Madison Avenue and emerging technologies at the nexus of the world. Startup companies need public relations too.

Finally, and importantly, a majority of media outlets are based here, and our industry as a whole thrives on relationships with the media. It is obviously possible to pitch journalists and set corporate strategy and engage with social media from anywhere, so I will admit that physically being in NYC isn’t the same differentiator that it once was. But there is no substitution for being in the right place at the right time. Certainly I’m revealing my East Coast bias, but it’s so much easier to make a connection when you can do it in person.

And hey, even the PRSA and the PRSSA Headquarters are here.

What advice do you have for someone trying to break into this market?

Use your PRSSA network. Stay in touch with any professional you meet at National Conference or at your local PRSA Chapters. If you haven’t learned this already, the public relations world is small and incredibly connected, so if they aren’t involved in the scene in NYC, chances are they know someone who is.

One thing you should know is that getting to NYC is difficult. Unfortunately, starting salaries are low, and the city is expensive. I don’t want to discourage anyone from making the jump, but living and working in New York is a conscious decision. You have to decide every day that the high rent, the crowded subways and other things you are giving up are worth it.

But if you make that commitment, this profession and this city will reward you. Celebrating a client’s launch with a rooftop party looking at the Empire State Building. Ringing the bell of the New York Stock Exchange. Taking an editorial meeting in the recently opened New York Times building. Every day presents the full possibilities of the greatest city in the world.

Public relations is a great profession, and I love my town. Look me up when you move in or if you’re just stopping by for a visit.

Jeremy D. Bridgman, APR, has lived and worked in New York City for almost 12 years since serving as the PRSSA 2003–2004 National President. He co-founded Clear in January 2014 to provide strategic and tactical services across the three types of media: earned, owned and paid. Connect with Jeremy: @JDBridgman and @AgencyClear.