World Cup Leads in Social Engagement: Are You in on the Action?

As a former soccer player and lover of the sport, I’m in heaven this summer. The 2014 FIFA World Cup is currently underway in Brazil, and despite the fact that the U.S. was sent home, I haven’t been able to peel my eyes from the television. I also haven’t been able to peel my eyes away from my laptop, iPad and iPhone — our favorite social platforms have made it easier for everyone to communicate with each other during this worldwide event.

Similar to when the 2012 Olympics was dubbed the world’s first “social Games,” 2014 has become the year of the first “social World Cup.” We saw in 2012 how much social media impacted reporting and how much brands increased their engagement among followers. Even though the tournament is still continuing, the World Cup is already the most socially-engaged sporting event of all time, according to Adobe Digital Index.

I’ve been following the World Cup conversation pretty closely and noticed a few brands have been hit or miss with their online content. I’ve rounded up my favorite posts of the tournament so far: 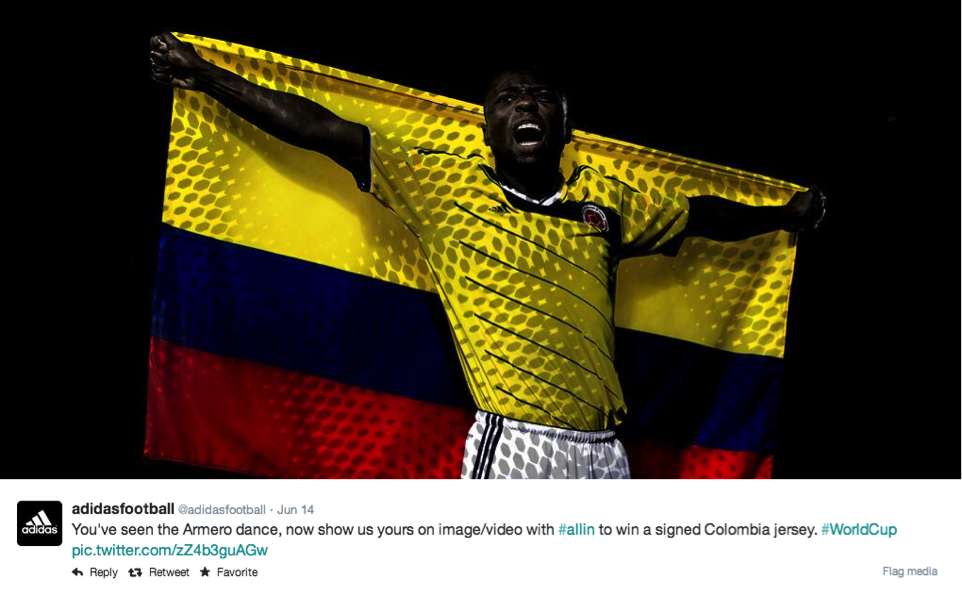 Adidas made a smart marketing move when Colombian soccer star, Pablo Armero, lead his team in a celebration dance after he scored the winning goal against Greece in the group round. The Colombian team’s dance went viral, and Adidas decided to involve its followers by asking them to show Adidas their dance using its #allin hashtag. This allowed participants to be automatically entered to win a signed Colombian jersey. 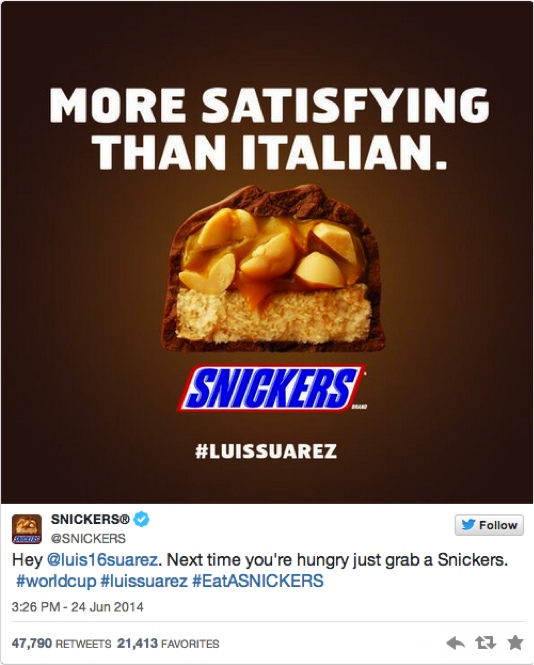 During the Italy-Uruguay match on June 24, popular Uruguayan soccer star Luis Suárez bit Italian player Giorgio Chiellini. Suárez was ejected from the match and given a four month, nine-game ban from FIFA as a result. The Internet blew up about it after the incident occurred and there were some very clever responses. I think this one from Snickers hit it right on the money. 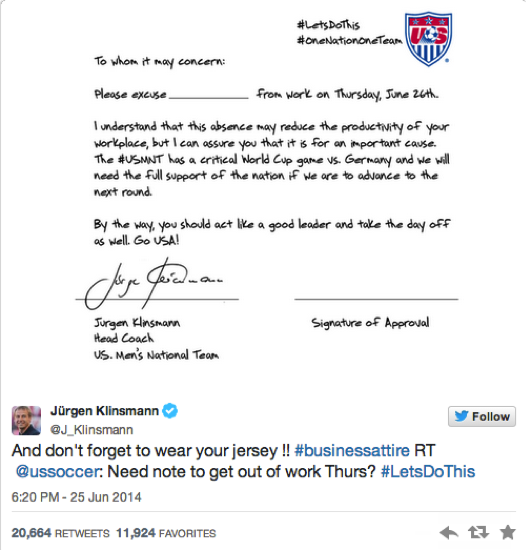 The official U.S. Soccer social media team also did a fabulous job keeping the nation in-the-know about the team’s happenings, from behind-the-scenes videos on Instagram to player biographies every time a substitute was made. They even went so far as to write an awesome “absence excuse” letter from head coach Jurgen Klinsmann, which he shared on his personal accounts. (It worked for some of my friends!)

Even if you don’t enjoy soccer or the World Cup, you can still learn something from the companies participating in the conversation. Have you noticed that your favorite brand created a new World Cup-themed video in hopes of going viral? Or did they whip up a series of tweets in real time to reflect the most recent game? Gain insight into your favorite brand’s online strategies by doing a social media audit of their platforms when events such as the World Cup occur. How they choose to take advantage (or not) can say a lot about their company and communication style.

What observations have you made concerning companies’ use of social media during the World Cup?

Mallory Richardson is a recent graduate of Louisiana State University and a community manager intern at Convometrics, a social media marketing agency in Chicago. She formerly served as the 2013-2014 PRSSA National Publications Editor in Chief. Follow her on Twitter at @malrich10 or connect with her on LinkedIn.