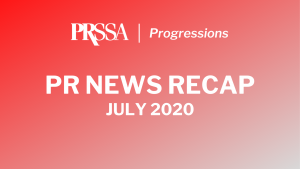 July has been another busy month for the communications profession. The industry continues to respond to calls for increased diversity, equity, and inclusion as well as adapts to the new surge in COVID-19 cases. As the second half of 2020 begins, here are some quick news pieces from the communications industry as well as my personal take on each:

PRWeek released it’s 2020 Power List this month and there is a whole lot to unpack with these rankings. Firstly, and perhaps most importantly considering recent events, is the recognition of a Black public relations professional at the number one spot. Damon Jones leads communications for Procter and Gamble, the behemoth consumer goods company behind popular brands such as Dawn, Old Spice, and more. Thanks to Jones’s leadership, the company has embraced new ways to do its part in helping consumers and society during the COVID-19 pandemic. Perhaps the most notable campaign has been partnering with TikTok star Charli D’Amelio to create a #DistanceDance challenge, a series that generated 3.5 million unique user-generated videos.

Speaking of TikTok, the company’s head of global communications, Hilary McQuaide, also makes the 2020 list, coming in at number 25. McQuaide has been with the company since its humble Musical.ly beginnings and has helped transform the brand into the go-to video creation app for Gen Z users. She has also pushed the brand forward despite recent challenges, most notably privacy concerns and allegations of censorship from the Chinese government.

Agencies Called Out for Lack of Diverse Leadership

The ongoing Black Lives Matter protests have brought about significant change in many aspects of society and the communications industry is no exception. Many brands have recently released statements and campaigns to let their publics know that they won’t stand for racial injustice and are hoping to be seen as champions for diversity and inclusion. The communications agencies behind these messages are currently under fire, though, as they are being called out for not practicing what they help to preach.

A recent NBC News op-ed from a University of Tampa communications professor called out advertising agencies for having a lack of diversity. The article, while not naming any agencies specifically, expressed concern regarding a culture of preferring familiar faces when hiring new employees and interns at many major advertising agencies. This practice prevents marginalized groups from attaining top leadership roles and perpetuates an issue of preventing minorities from being represented in the C-suite.

Also during this month, top communications firm Weber Shandwick released its diversity report, revealing disparities in the diversity of its own leadership team. CEO Gail Heimann called these numbers “unacceptable” and has since vowed to improve the agency’s diversity at all levels.

New York Governor Andrew Cuomo has been pretty busy during this pandemic. He may be most known for his parody-inspiring daily briefings, but recently spearheaded a new campaign in partnership with the Ad Council to encourage all of America to mask up.

The National PSA campaign, featuring voiceovers from famous celebrities such as Morgan Freeman and Jeffrey Wright, shows Americans of all occupations wearing masks as they work in a COVID-19 world. The PSA videos encourage all Americans to get “New York tough” while promoting the benefits of wearing masks in public. The ads are set to run on TV throughout the country, with different variations featuring different narrators set to roll out slowly over time.

This comes at a time when COVID-19 cases continue to surge in many parts of the U.S. as the country nears another peak. Some states, such as Indiana, Ohio, and Minnesota are requiring all residents to wear masks while others don’t have such restrictions in place. It is clear that communications professionals will be needed regardless to help communicate key information regarding the latest restrictions and guidelines as the COVID-19 pandemic continues to unfold in America and across the world.

As we continue through the second half of this historic year, communications professionals will be needed to continue advocating for many aspects of society. The concurrent racial revolution and worldwide pandemic require increased transparency and urgency in crafting effective messaging, and the role of the public relations professional is as crucial as it has ever been.