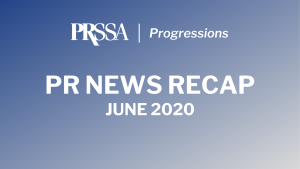 June has been a very active month for the public relations industry and society as a whole. The ongoing protests following the death of George Floyd have led to a movement that has forced companies and audiences alike to stop what they are doing, listen, and take a stand. This in addition to the ongoing concerns surrounding COVID-19 and two landmark Supreme Court rulings have put a lot on the plate of the public relations professional. Take a look below at some of the top stories in public relations along with my personal take:

Aunt Jemima, Uncle Ben, and others to go as brands respond to ongoing racial protests.

This announcement triggered a wave of brand reconsiderations from other companies as they take a closer look at the cultural nods that have led to their brands being created. As an outsider looking in, these moves seem painfully obvious and well overdue (just take a look at the old Aunt Jemima logos). Then again, something like the name of a syrup brand never came to mind for many of us before the recent media attention to the Black Lives Matter Movement. I wonder what other stereotypes are hidden within popular brands? All companies should take notice and closely evaluate their brands in light of this.

Something that reigns true in public relations and in life is that you have to put actions behind words, or perhaps in front of words. This saying takes many forms (put your money where your mouth is, etc.) but it all comes down to companies being authentic in word and action.

Recently, many major technology companies have been called out for releasing statements in response to the George Floyd protests but not backing them up with action. This CNBC article reveals that top technology companies such as Apple and Facebook have seen relatively low increases in the percentage of Black employees since diversity numbers started being released in 2014.

At the same time, this article from The Verge explains how many tech companies remained silent after the Ferguson, Missouri protests following the death of Michael Brown in 2014. Many if not most major companies have decided to release statements in support of the Black Lives Matter movement now, but how authentic are these statements if there isn’t sufficient action to back them up? I hope to see more action from companies and organizations in moving their diversity initiatives forward and I look to push diversity in the organizations I participate in.

Twitter releases audio tweets, but will they catch on?

I first heard about audio tweets from, well, a tweet. For Twitter, a move like this is a pretty big deal and makes a lot of sense. Podcasting continues to be a popular medium of content, so adding this new feature could be a very engaging addition to the platform. The company’s official blog post on the new feature describes it as a way to “create a more human experience for listeners and storytellers alike.” I could see many good and bad case scenarios for audio tweets in the future and I am excited to try it out for myself. For now, audio tweets are for the iOS version of Twitter only with more platforms to come later on.

Zach Ferenchak, 2020-2021 vice president of brand engagement, is a senior at Capital University, a private university in Columbus, Ohio. He is majoring in emerging media with an emphasis in public relations and minors in journalism and marketing. In his free time, Ferenchak can be found obsessing over the latest gadget or video game, exploring a coffee shop with friends, or going on a trail run. He hopes to elevate the voices of all PRSSA members through the organization’s various brand platforms. Connect with him on LinkedIn or Twitter.