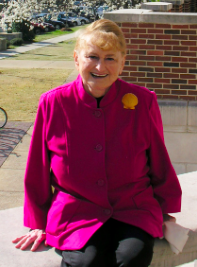 With March being National Women’s Month, Samford University’s PRSSA Chapter will be showcasing and honoring the wonderful women of public relations. One woman in particular sticks out to us. Betsy Plank, or shall I say “The First Lady of public relations,” hits close to home as she was a graduate from the University of Alabama. Also, the Plank Center in Tuscaloosa, Alabama is named in her honor. Betsy Plank acquired numerous awards, committed many acts of service and contributed greatly to the field of public relations over the course of her extensive career. The month of March will be filled with celebration to honor her great work.

Betsy Plank’s achievements and accomplishments are plentiful. To name a few, Betsy Plank was the first women to receive three of PRSA’s most honored awards: The Gold Anvil Award, the Paul M. Lund Public Service Award and the Patrick Jackson Award for Distinguished Service to PRSA. Betsy also served on the board for United Way and Girl Scouts of Chicago. Betsy had a long career in public relations and her outlook and leadership shaped the way the field is viewed today.

When the month of March comes to an end, Samford PRSSA’s celebration of Betsy Plank will not. On April 4th, the Plank Center will be celebrating “Betsy Day” and Samford PRSSA will be joining. As we lead up to Betsy Day, Samford PRSSA will share facts and tips for public relations students and leaders across social media. There will also be a donation drive, as Betsy Plank had a huge heart for giving back.

Join Samford University PRSSA as we celebrate National Women’s Month and Betsy Plank by following along on Instagram: @prssa_samford and Twitter: @PRSSAsamford.

Susanne McCrary is a senior at Samford University. She is originally from Huntsville, Alabama but has loved living in Birmingham during her time at Samford. She’s a Journalism and Mass Communications major concentrating in public relations. Last semester she worked on a social media campaign for United Way, where she discovered for passion for event planning, social media, and overall public relations.