Small Chapter Success and How to Achieve It

PRSSA Chapters come in small, medium and large sizes, but small Chapters in particular are plagued with the challenge of finding success.

Being a member of a small Chapter myself, I have dealt with this issue first hand. Low-attendance Chapter meetings are now my worst nightmare. At York College of Pennsylvania, our Chapter averages around 30 dues-paying members yearly.

But like any great Chapter, we have conquered our limitations. Now that I am Chapter president, I have to carry over past leadership skills into my term. Below are four tips to achieving small Chapter success.

My fondest memory with PRSSA so far has been attending the PRSSA 2014 National Conference for the first time last fall in Washington, D.C. Along with sessions featuring public relations professionals and networking with members from across the country, I formed close bonds with my Chapter’s executive board and other general members. This bond continued beyond the Conference and has kept me active with my Chapter ever since. A few other general members experienced a similar “PRSSA high,” as well. Truly devoted members are a huge building block for small Chapter success.

Reach out to nearby public relations professionals.

Last fall, my Chapter contacted the front office of the Baltimore Ravens. Our school is just one hour outside of Baltimore, so we took a chance. Before we knew it, Kevin Byrne, senior vice president of public and community relations, was set to come speak at a networking dinner at our school in the spring. Touchdown! The event was a huge success with widespread attendance from the outside community, PRSSA and PRSA members and other majors, like sport management. Greek members even invited their fraternity brothers. 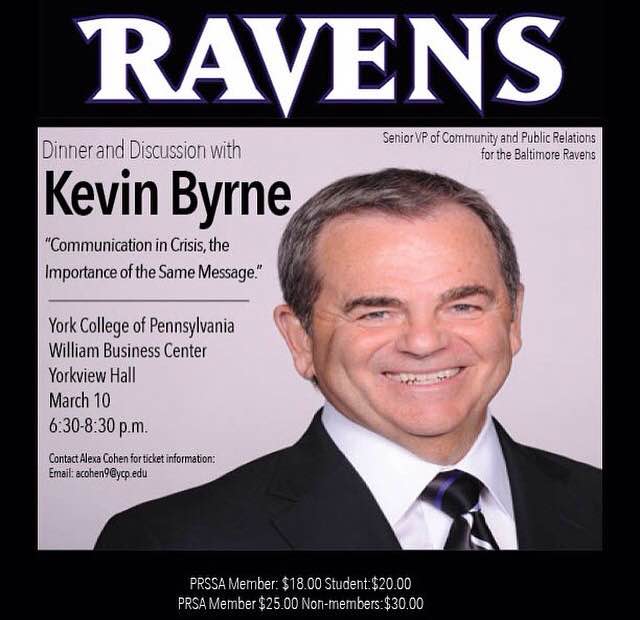 “I find that PRSSA has members who are involved in so much, so it helps to incorporate their other interests in whatever you do,” said Katie Lamb, York College PRSSA 2013–2014 Chapter president.

Those in attendance also toured the Ravens training facility. Hosting a large-scale event is a great tactic for attracting membership and boosting Chapter credibility.

Take every opportunity to showcase your Chapter.

Club fairs. Open houses. Festivals. These are a few occasions when my Chapter has done its best promotion.

“Show photos of your Chapter in action and having fun and use short videos on your website and social media,” advised Liz Smith, president of the Central PA PRSSA Chapter.

Strong campus recognition will go a long way. PRSSA members are also encouraged to engage in Twitter chats and advocacy movements with members from other Chapters. This is a great way to achieve national recognition for your Chapter, which segways into my fourth and final tip.

Yes, I know, you’ve heard this before. But this tip is one of the most useful. Meet others with similar aspirations at National Conference in the fall. Send a Chapter leader to National Assembly in the spring. Get your new Chapter president out to Scottsdale, Ariz. for Leadership Rally in the summer. You’ll learn new methods for keeping your Chapter going and establish tons of connections along the way. Make sure to share your national experiences with students and faculty at your school because national recognition will also build your reputation on campus.

“The Northern Michigan University Chapter of PRSSA has always been a small Chapter, but by getting involved nationally, we’ve made a name for ourselves on our campus and within the society,” said Emma Finkbeiner, PRSSA 2015–2016 publications editor in chief. “We’ve had a National Committee member represent NMU four years in a row now and our university recognizes our dedication. They help fund a huge portion of our National Conference fees every year, enabling us to bring a large group of students.”

Utilizing these practices knowing that they have kept my Chapter active is what instills confidence in me as I begin my term as Chapter president. I look forward to building upon these practices and discovering my own mechanisms for success that I can share with other Chapters and future leaders of my own small Chapter.

How has your small Chapter achieved success?

Lucas Dimini is a junior at York College of Pennsylvania in York, Penn. studying public relations with minors in speech communication and marketing communication. He is the Chapter president of his PRSSA Chapter. Outside of his academic endeavors, he can be found watching reality television, drinking soda and going on extremely long walks. Follow him on Twitter, Instagram or connect with him on LinkedIn.