Hashtag-ing All the Way to the White House: A Look at the 2016 Presidential Race on Social Media

The 2016 presidential candidates have been in the news these past few months, with a lot of politics being discussed over social media. Social media has risen to be one of the best tactics for campaigns and can be especially beneficial for politicians. Whether on Twitter, Facebook or Instagram, politicians are trying their best to enter the hearts and minds of voters.

For example, it has been reported that Hillary Clinton is crushing her current competition over multiple social media platforms, according to a USA Today Politics article. As a young person active on social media, I can’t say that I am surprised. The former first lady has certainly made her mark through Snapchat, Twitter and Instagram, which I have seen on all of my feeds. She also holds the lead in followers among the rest of her competition, according to USA Today.

On the other hand, candidate Jeb Bush is getting personal with his Instagram posts, according to the Washington Post. 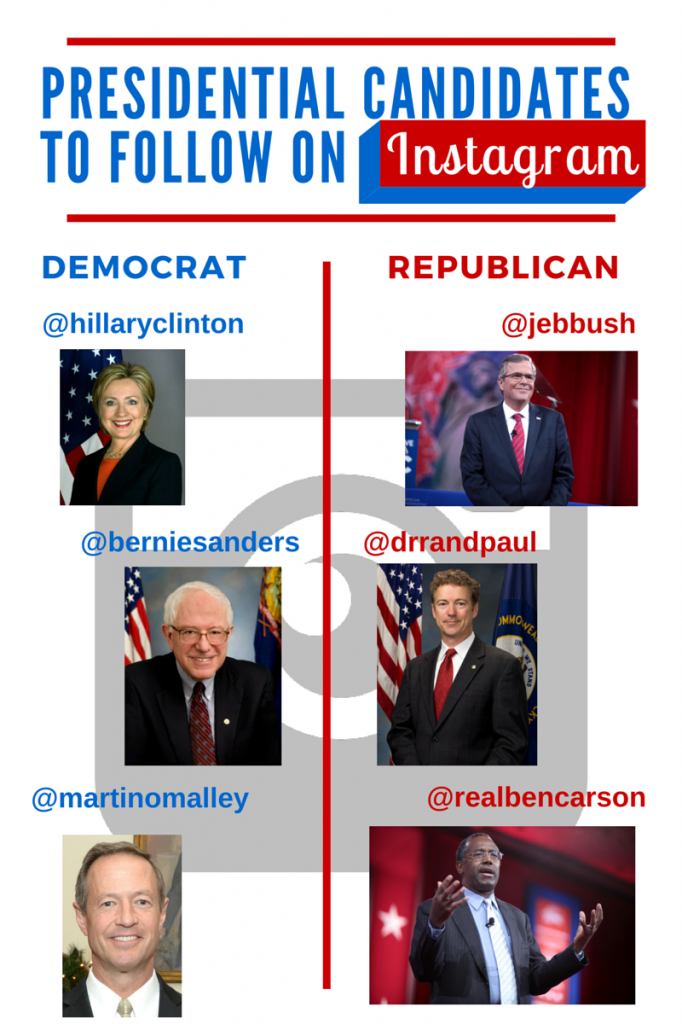 Not only has the use of social media created a more intimate setting for the candidates and their voters, but it also saves them a significant amount in campaign funds. Twitter, Facebook and Instagram have provided candidates a way to reach a lot of people instantly. Not only are the politicians able to share their message, but so are their followers, which is yet another form of free advertising.

“Twenty years ago, a campaign would need to go through one of the broadcast networks or places like the New York Times, Washington Post or Wall Street Journal to get major coverage for a story. The onset of the Internet changed that, allowing political operatives to use smaller news outlets and, eventually, partisan news outlets to push stories into the public arena,” said a previous Romney staffer.

The competition will be heating up as the months go on, turning from “who wore it better” to “who posted better?” Social media will consistently be a battle among the candidates this presidential election, stirring up the conversation across millions of news feeds. As Bob Dylan once said, “the times they are a changin’” and our nation’s leaders seem to be catching up.

Which politicians do you follow on social media and why?

Lauren Creekmore is a senior at Liberty University double majoring in public relations and advertising and digital media with an emphasis in video. She is currently the Chapter president of Liberty University PRSSA and an intern at the non-profit Operation Smile. Connect with her on Twitter @LCreekmore1.