City Series: Getting Connected to the Public Relations Scene in Atlanta 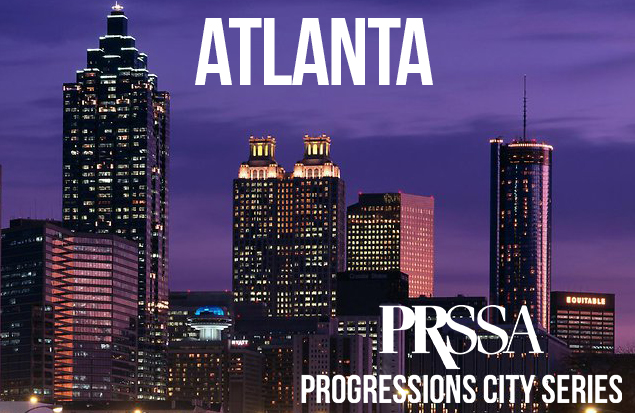 Atlanta has a history of reinventing itself, and right now it’s a sprawling city with a very diverse population. This fall, Atlanta will also be home to both the PRSA International Conference and PRSSA National Conference. It’s a great opportunity to check out all the jobs, sample the exciting lifestyle and learn how to network in a location known for Southern hospitality.

Booming Business
Because of the convenience of Hartsfield-Jackson Airport and many other factors, Atlanta has become a go-to destination for U.S. company headquarters ranging from Porsche and Newell Rubbermaid to Coca-Cola and UPS. Proximity to the Centers for Disease Control and Prevention has prompted a flurry of health and tech startups in areas such as electronic health records and business continuity. The Atlanta Tech Village has also become a hub for new high-tech companies making their mark in fields ranging from sales force automation to video games and multimedia. Government jobs, nonprofits and more than 100 public relations agencies help make Atlanta very attractive for new professionals.

Exploring Local Neighborhoods and Attractions
Atlanta natives take full advantage of temperate weather most months with hikes, runs and bike rides along the new Atlanta Beltline, which has brought green space, outdoor dining, art exhibits and neighborhood fellowship to a former loop of train tracks in an in-town core of the city. From live, work and play communities such as Atlantic Station to reimagined neighborhoods such as West Midtown and Castleberry Hill to the distinctive vibes of bohemian Little Five Points or old-school Atlanta favorites such as the Virginia Highlands and Buckhead, there are amazing places to check out. These areas are complete with parks, parades, music festivals and year-round fun.

Atlanta denizens and tourists alike make their way to marquee attractions such as the Georgia Aquarium, Center for Civil and Human Rights, Martin Luther King, Jr. National Historic Site, Jimmy Carter Presidential Center, High Museum of Art and hundreds of acclaimed restaurants serving some of the world’s most eclectic dishes. Star-sighting has become another new hobby for some, with more than a dozen major motion pictures and television series filming in Atlanta — nicknamed “Y’allywood.” There are also great arts available on the stages of the Alliance Theatre, Actor’s Express, Terminal West, Center for Puppetry Arts, Atlanta Symphony and Chastain Amphitheater.

PRSA and PRSSA in the Area
With more than 900 members, PRSA Georgia has become the second biggest Chapter in the nation. Newcomers are encouraged to plug into this organization to meet new people and keep skills sharp. The Chapter sponsors an event called Real World early in the spring semester each year to bring together students and professionals; many students come out of this event with their first internship or job. In fact, there’s a vast network of PRSSA Chapters nearby, including those at:

Both those already in Georgia and new to the state have a great shot at working in Atlanta’s thriving corporate and agency environment.

Those wanting to know more about Atlanta jobs should get their hands on the coveted Atlanta Book of Lists, published annually by the makers of the Atlanta Business Chronicle. This book shows companies by industries and sectors and even shares agencies’ client lists so you can see if there’s a firm that meets your particular niche. Additionally, networking through nonprofit volunteering is key to many Atlantans’ hearts and social circles.

Now more than ever — and especially with PRSA and PRSSA Conferences coming to town — it’s a great time to consider Atlanta. There’s a niche, a neighborhood and networking opportunity for nearly anyone who wants to be part of the action.
_____

Stephen Michael Brown, APR, is managing director of Cohn & Wolfe Atlanta where he manages communications and marketing initiatives for consumer, corporate and technology clients. He is president of PRSA Georgia this year, where Atlanta will be the host city for both the PRSA and PRSSA conferences in November.