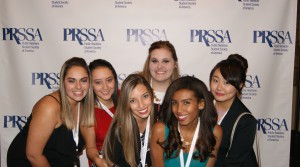 From education to the workforce and beyond, diversity plays a critical role in the world today.  But what are the factors of diversity, and how has diversity changed in public relations over the years?

Jason Mollica, public relations and marketing consultant as well as president of JRM Comm, Inc., began his career in television and radio before transitioning into public relations in 2005.

With the workforce overcoming the lack of representation of females in public relations and still undergoing changes in increasing minorities, it is important for employers to seek more than just the same types of people.

“I prefer to have people from all races and genders working together because you get many ideas and can be helped in understanding other cultures and how they look at the world.  In public relations, that’s important, as well. Clients don’t want one idea; they want many. By being more diverse, we as pros can provide a broader scope,” Mollica said via email.

Vi Tran attends the University of Texas at Austin where she serves as the PRSSA Chapter president.  She identifies as an Asian-American female, and she said she has learned from conferences, internships and other professional, as well as social, experiences that diversity goes beyond just demographic representation to include other factors such as skill set and experience level.

When people think about diversity, they typically think of race and ethnicity, but clearly it goes much further than that. Age, gender, skills, backgrounds, experiences, personalities, interests and more all contribute to making for a well-rounded diverse team.

Tran said she thinks PRSSA is helping to diversify the workforce in the field.

“The next generation of young professionals is already being encouraged within the classroom to embrace diversity. If anything, PRSSA is influencing diversity with promotion of Diversity Month, collaboration between schools from east to west — and a constant push for more global thinking positions PRSSA students to be advocates of diversity,” Tran said.

Adam Piccin is a junior studying public relations, health communications and marketing at Otterbein University in Westerville, Ohio. He currently serves as president of the Otterbein PRSSA Chapter.  More information on Adam’s professional experience can be found on his website. Follow him on Twitter @adampiccin, or connect with him on LinkedIn.