PRSSA marked February 2020 as “PRoud Month,” and I used that month to reflect on the power of pride. A Twitter Chat was hosted on the topic led by Adriênne Bolden, PRSSA’s inaugural vice president of diversity and inclusion. The chat left me thinking about the power of representation.

How did I get here, able to be #PRSSAPRoud? I want to highlight three particular times that my PRSSA membership and witnessing representation allowed me to feel confident with the decision I made to pursue a career in public relations.

Being Black in Boston

I attended “PR Advanced: It Starts Now,” Boston University’s PRSSA District Conference (at the time known as a Regional Conference) in February 2018. This was my first conference, and I had little idea what to expect.

Despite the amazing programming, I felt very alone at first. Then I made two wonderful connections, both people of color, and the entire experience changed.

The first was a student, Eric Cooper, at the time serving as the Husson University PRSSA Chapter president. We talked about what it meant to be Black and pursuing public relations, which motivated me. The second was Ermolande Jean-Simon, a college liaison for the PRSA Boston Chapter. The conversation we had led to me being interviewed about my conference experience and my thoughts on diversity and inclusion.

Less than two months after the conference, I was elected to serve as the City College of New York PRSSA Chapter vice president. My first assignment: help plan a visit to our campus for Yvette Noel-Schure, the entertainment public relations icon, best known as Beyoncé’s publicist. I could not have been any more starstruck — then I learned Noel-Schure was a CCNY alumna who was eager to return.

The City University of New York, New York City’s public university system which includes my campus, tends to have an undeserving but less-than-stellar reputation. Seeing somebody who graduated from my school reach great levels of success in the communications industry made my dreams feel that much more obtainable. I had just transferred to CCNY earlier that year, so meeting Noel-Schure and hearing what she had to share reassured me that I made the right decision choosing my new school and career path.

What I learned was absolutely worth the stress of planning an event this important so early into my PRSSA tenure.

In June 2019, I had the pleasure of attending “The LGBTQ Experience in Public Relations: Stories that Shaped Our Profession, Our Values and Our Future,” a set of two panels hosted by the Museum of Public Relations in honor of Pride Month and the 50th anniversary of the Stonewall Uprising in New York City.

I have recently become more comfortable with my identity as a queer person — notice my use of the American Dialect Society’s word of the decade in my bio, for example. And hearing the stories of the role public relations plays in the LGBTQ community and, conversely, the role the community’s fight for rights plays in the lives of public relations practitioners was inspiring. It was reassuring that other people’s internal journeys have been just as confusing as mine.

Troy Blackwell Jr., a panelist then serving as a PRSA New York director who is also a CCNY alumnus, was particularly powerful with his choice of words. I truly felt validated in my identity, and I have become more comfortable expressing that part of myself (beyond just wearing a trans flag colored tie at the event).

There are so many role models I have in this industry, from those I have already listed, to those who came before me in PRSSA. As a queer person of color graduating from a public institution that occasionally brands itself as the “Harvard of the Proletariat,” seeing representation in the communications industry has been essential to my feeling at home in PRSSA and in the industry.

As I said in a social media feature, “I hope I can show people who look like me where they can end up, just as others have done for me.” 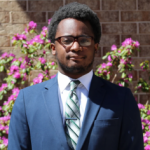 Terrell F. Merritt is the PRSSA 2019–2020 vice president of brand engagement and the editor in chief of Progressions. They are a senior studying advertising and public relations at The City College of New York’s Department of Media and Communication Arts. Upon graduating in May 2020, they hope to use technology to modernize the field of public relations. Follow them on Twitter @terrellfmerritt and connect with them on LinkedIn.