Local Bands and the Art of Self-Promotion 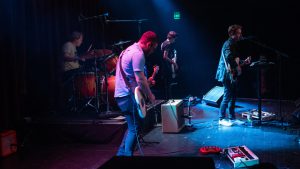 You’d be hard pressed to find anyone better at self-promotion than a local musician. With tight budgets and probably not a whole lot of public relations experience, it’s interesting to see the ways artists have found to promote themselves. Having worked closely with local bands as a music journalist for a little over a year, I’ve come up with a short list of the most effective and cost-efficient methods I’ve seen bands use.

Last year I interviewed two guys from one of the nearby radio stations who host a weekly show that features local artists. During the interview, I asked them what the process was for artists who were trying to get their song played on the show. They said it was easy: e-mail them a good quality recording of a song and if they like it, they’ll play it. I was surprised by how simple it was and how many people I knew who weren’t taking advantage of it.

Here’s my area of expertise. Do not wait around for the press to find you. Go to them. A lot of the stories on our website have been picked by the editor. On several occasions, however, I’ve been asked to write a story for someone who sent us a press request. Depending on the timeframe and what the person wants covered, we usually just do a phone question and answer session and then it’s up on the website the next morning. It’s quick, easy and free, and posting a link to the story is a great way to stay active on social media platforms.

There are more than just three ways to self-promote (I’m personally still a sucker for a good old-fashioned poster) but these are just a few examples of the most impactful and cost-efficient methods I’ve seen bands use.

Rachel Parrish is a junior public relations and broadcast journalism major at Samford University where she works for the sports broadcasting department and as a writer for Magic City Bands.