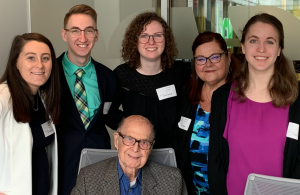 Taxis pulled up to the curb and cars honked as they weaved through the narrow streets. Crowds of tourists and businesspeople crossed the bustling intersections, preparing to start their day in the city that never sleeps.

For student executives in MaverickPR, the Nationally Affiliated Student-run firm from the University of Nebraska at Omaha, the sights and sounds of midtown Manhattan were a large departure from their daily lives in Omaha.

However, the professional development trip provided the students a one-of-a-kind opportunity to learn about public relations careers from professionals in the field.

“One of the greatest rewards of teaching is giving the most hardworking and dedicated student leaders an opportunity of a lifetime with this professional development trip to New York City,” says Karen Weber, MaverickPR faculty adviser. “It’s rare for students to get one-on-one sit-downs with leaders in global communications. You can’t put a price on this.”

Made possible by the generosity of UNO alumnus Paul Critchlow, the 4-day New York trip provided Weber and her students special access to some of the world’s leading companies such as Pfizer, Bank of America and Burson, Cohn & Wolfe (BCW), the third largest public relations firm in the world.

At BCW, the MaverickPR officers met Harold Burson, the company’s founder who is considered “the godfather of PR.” Burson, 98, still visits the office three days a week.

During the more than one-hour meeting, the students learned about Burson’s career and had the opportunity to ask him questions. They also received signed copies of his book, “The Business of Persuasion.”

The team also met with Benjamin Malloy, vice president of BCW, who is a leading member of the U.S. media and strategy teams. Malloy shared his insights about skillset diversification and making a name in the field.

As the organizer of the trip, Critchlow joined the team on each professional visit. A prominent public relations and crisis communication leader, he has invited Weber and MaverickPR officers to New York since 2010.

Weber says she greatly appreciates how Critchlow “takes the students under his wing” and customizes the visits to their interests.

“Paul is an amazing friend and mentor who gives so generously,” Weber says.

Throughout the trip, Critchlow served as a professional resource to the students, who asked him questions about the city and his career from his position as vice chairman of Bank of America Merrill Lynch to senior intern at Pfizer.

Critchlow says he was impressed by the curiosity and ambition of the students.

“That was a truly memorable visit,” Critchlow says. “[I] loved the students. [They were] so talented, individualistic and personable.”

At each company, the officers, Weber and Critchlow interacted with global communications leaders and asked questions about crisis communication, media outreach and social media.

Students also had the opportunity to share their career interests and learned ways to market themselves from professionals.

“The opportunities to network, tour companies and explore New York City were unlike anything I have had the privilege to do before,” says Abbie Perry, MaverickPR director. “I am extremely thankful for the chance to interact with experts in the industry. After this professional development trip, I knew I chose the right field for me.”

At a visit to Bank of America, the student executives met with Selena Morris, director of global communications, and Melissa Matson, senior vice president of communications. During the meeting, Morris and Matson shared advice on working with the media and building trust between a company and its clients.

In addition, the team visited with Al Ribeiro, global corporate affairs lead at Pfizer. At the headquarters, Ribeiro conveyed his advice on maintaining healthy working relationships with co-workers and learning from mistakes.

After meeting with Ribeiro, the students talked with Pfizer’s Chad Parizman and Niamh Roberts, the director of social media and senior manager of reputation and science communications respectively. During the meeting, Parizman and Roberts shared social media tips as well as writing advice. As the editor of Pfizer’s Get Old website (a blog about healthy living), Roberts shared the importance of advocating for multiple age groups.

One of the many highlights of the trip for the students was the visit to the Public Theater, an organization that seeks to provide the arts to all New Yorkers. At the theater, the team met Lars Jahns, the organization’s chief advancement officer.

During the meeting, Jahns shared his experiences as a student leader in PRSSA as an undergraduate. He says his involvement as president of PRSSA benefitted his professional development greatly.

Jahns also conveyed the importance of working in a career that makes one happy. He shared his professional journey, including his work at Robin Hood, New York’s largest poverty-fighting organization.

“His story was truly inspirational and taught me to keep pursuing my passion to work with an arts nonprofit,” says Andrew Schnitker, MaverickPR co-assistant director.

In addition to the professional tours, the team had the opportunity to see many famous sights, including Central Park, Greenwich Village and Times Square. Critchlow also treated Weber and the student leaders to a showing of Wicked as well as tours of the National 9/11 Memorial & Museum and One World Observatory.

“Without MavPR, I would have never been provided an opportunity like this,” Welsh says. “It’s the highlight of my college education.” 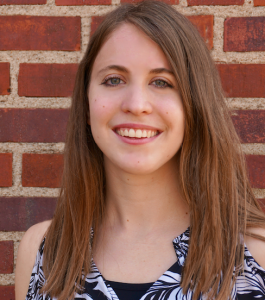 Juli Oberlander is a May 2019 graduate of the University of Nebraska at Omaha with a Bachelor of Arts in Communication. As the outgoing chief operating officer of MaverickPR, Juli has served as an account executive for the Genius of Warren Buffett E-MBA course, the Horace Mann League and Madonna School and Community-Based Services. Juli has also worked as a service year participant for Champions of Aging, an organization with the goal to build a workplace that understands the complexities and individuality of the aging process. In her work, Juli enjoys serving nonprofit organizations through news and feature writing as well as social media. Her dream job would be as a social media manager for a sports team or corporation.
Tags :
careerFirmleaderopportunityPRSSApublic relationsresourcestudent-run firmsstudentstours