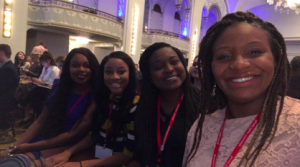 Recap: The Invention in PR session detailed Ritchie’s success in bringing together his passions and interests. As a PR agency owner, Ritchie took on his own band as a client, and sought to find a way to bring national exposure to an unsigned, independent band. In the digital age, most artists would turn to an online-only campaign and a digital download, but The Lights Out took a hybrid approach and a completely different direction.

The sci-fi focused band partnered with Aeronaut Brewing Co. to create the first ever album released on a beer can. The campaign piqued the interest of a variety of industries like food, science, business, technology and music. The beer they brewed was called “T.R.I.P.” and served as fuel for a listener traveling through the parallel universes explored in the songs.

The beer can contained a social media trigger. When a consumer posted the trigger, the band responded to them, told them what they were doing right now in an alternate reality and gave them a link to the album. Ritchie was able to create an association between sound and taste to transport listeners across the worlds his band’s music created, for a full sensory experience. The campaign sparked attention of avid beer and alternative music listeners and soon the message took off on user generated social content, furthering the band’s success and reach. Ritchie let the beer do the talking and now his band holds the title of creating the first studio album released on a beer can, proving him to be an inventor and communications innovator. Ritchie shared examples of other products created with PR in mind.

The creation of a product by a PR agency laid the groundwork for a successful campaign. Ritchie challenges future PR practitioners to take a stronger role in product development, and go beyond promoting the products they’re given.

Emily Zekonis is a sophomore public relations major attending West Virginia University from Delaware County, Pennsylvania. She is currently involved in a variety of student organizations and is currently the treasurer of the WVU PRSSA Chapter. Follow @EmilyZekonis on or Emily Zekonis on LinkedIn.