City Series: Why Seattle is One of the Top Cities for Millennials Working in Public Relations

In a survey of 500,000 Millennial workers, PayScale ranked Seattle as the top city for Millennials to meet people their own age, max out their pay and avoid lengthy commutes. Most students I talk to want to move to New York, Washington, D.C., Chicago or Los Angeles, but few actually mention Seattle. I’ve lived in eight cities across the country, and for me, Seattle is one of the best places to live for the following reasons: 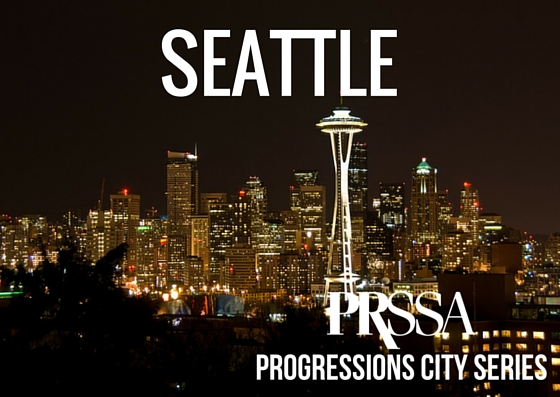 Top companies. Seattle is home to Starbucks, Microsoft, Amazon and Nordstrom. All of these companies have a significant presence in the city—downtown Seattle’s phenomenal growth can be largely attributed to Amazon. The culture in the Pacific Northwest is different than many other areas of the country. Seattle companies are innovative and have an entrepreneurial spirit—the environment is important and these companies want to make the world a better place. Most major public relations firms have a Seattle presence as well.

The music scene. Seattle is a mecca for people who are music junkies like me. Birthplace of Jimi Hendrix and grunge in the early ‘90s, Seattle welcomes travelers at the airport with Pearl Jam and Nirvana blasting over the speakers (The airport, SEA-TAC, also has a fantastic collection of Pearl Jam tour and album posters and has a Sub Pop store). Seattle is home to one of the top public radio stations, KEXP, and home to music label Sub Pop who represents iconic bands such as The Shins, Mudhoney and Sleater-Kinney. The EMP museum (Jimi Hendrix Experience), funded by Microsoft’s Paul Allen and designed by famed architect Frank Gehry, also calls Seattle home.

Laid-back vibe. Business suits? No way. Seattle is laid-back. At Amazon, many employees wear t-shirts and jeans. Innovation is important in Seattle rather than what people wear. The food is also fantastic and craft breweries are a staple in Seattle. Tip: If you interview for a job in Seattle, learn what the culture of the organization is so you don’t show up wearing a business suit for a company where every day is casual Friday.

The outdoors. Seattle is one of the most beautiful cities in the world, and has much to offer for outdoor enthusiasts. And no, it does not always rain in Seattle (it actually rains very little in the summer). The city is bike-friendly and has some excellent options for public transportation. Hikers have many choices and more adventurous ones can tackle the tough peaks of Mount Rainier and Mount Saint Helens, but trails are plentiful for all hiking levels. Boating is also a popular activity on the lakes in the summer. Seattle has a lot to offer nearby in cross country skiing, snowboarding and downhill skiing. Famed Whistler in British Columbia is only four hours away.

PRSSA and PRSA are two places to start making connections in Seattle. The PRSA Puget Sound Chapter is one of the 10 largest PRSA Chapters and frequently hosts events and webinars. Student development and mentoring opportunities are important initiatives of this local Chapter that boasts more than 400 members. The University of Washington has a tremendous presence in the city as well. Other universities, such as Seattle Pacific University and Seattle University, also call Seattle home. Many people I have met in Seattle are from the area and they love it so much they never want to leave. After living here, I can see why.

Tina McCorkindale, Ph.D., APR, is the president and CEO of the Institute for Public Relations. She is serving as the 2015-2017 PRSSA National Faculty Adviser. Formerly, she was an Associate Professor of Public Relations at Appalachian State University and has taught at several universities, including Cal Poly Pomona, University of Vermont and Ramkhamhaeng University in Bangkok, Thailand. She has taught in West Virginia University’s graduate IMC program since 2009, and has nearly 10 years of experience working in corporate communication and as a senior research analyst. She lives in Seattle, Washington.