Getting to Know the BEPS 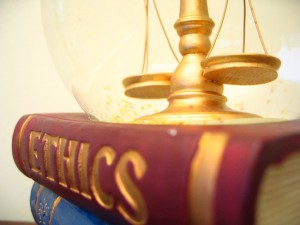 In the public relations industry, ethics can have a few blurred lines. But have no fear — there’s an app and a committee for that. That’s right, the PRSA Code of Ethics is now mobile and available for all Android and iPhone users. The app even gives users email access to the PRSA Board of Ethics and Professional Standards (BEPS) which is in charge of un-blurring these lines by recommending solutions to ethical issues.

I recently got in touch with two BEPS members, Bobbi Simmons and Kirk Hazlett, to pick their brains on ethics. Simmons has been a BEPS member since January 2013 and has held the title of public relations director of the Arlington/Roe & Co. for the past seven years. This year is Hazlett’s first year on the board, and he has been an associate professor at Curry College in Massachusetts since 2006.

As students preparing to enter the workforce soon, we should be informed about expectations of working in the public relations field. Simmons’ best advice to young professionals is to make sure to study the Code before taking on a real job. Hazlett’s takeaway from being in the business is to not stress too much about it, but he advises asking questions of all sorts. “No one can possibly know everything; you do it by learning,” Hazlett said.

When discussing the largest ethical sin, Simmons declared it to be when people don’t triple and quadruple check their facts or when people fudge their information altogether. A small stretch of the truth can cause a lot of mistrust in your professional life and can be responsible for your ultimate demise. Hazlett, on the other hand, believes that failing to balance your client or employer’s wishes and the needs of public knowledge is the biggest ethical sin. You must balance pleasing your client or employer — who signs your paycheck — with pleasing the public — who you try to serve and protect. In the end, Hazlett encourages you to ask yourself, “Am I willing to compromise my standards for a paycheck?”

Ethics gurus strongly believe that social media isn’t changing ethics, but rather reinforcing it.  Since there are so many new ways to share and write news, journalists have to be even more aware of what they post to the world. Hazlett believes the growing field of ethics is due to the growth of global public relations. When you think about it, international public relations is actually a relatively new thing. Cultural differences impact how people communicate and can cause many ethical clashes. For example, in some European states, reporters expect public relations professionals to pay them for writing about their clients. Should there be a universal code of ethics? Should the U.S. suggest that all countries adopt our Code? Should the U.S. adopt other cultures’ ethical expectations?

Ultimately ethics will remain the same because our job will always be to tell the truth, regardless of possible community backlash.  Entering into the public relations industry as a new and young professional is scary, but if you take it one step at a time, don’t freak out, ask questions and do some research, you should do very well. Feel free to contact the BEPS or the PRSSA National Committee with any ethical questions.

Kelsey Miller is a junior at Ohio University’s E.W. Scripps School of Journalism and is majoring in strategic communication with a specialization in marketing and tourism. In addition, she is also acquiring a social media certificate. She is a fan of long walks on the beach but prefers a good leg day at the gym, followed by a night of Seinfeld and kettle popcorn. Miller’s ultimate goal is to be a representative a company or to do public relations work for a high class resort or hotel.