Go Bold or Go Unknown: How One PRSSA National Conference Attendee Made the Connection of a Lifetime 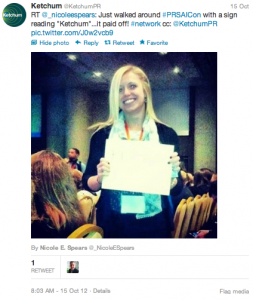 For one eager 2012 National Conference attendee, it was a combination of both that brought her face-to-face with one of the most influential leaders in public relations.

Nicole Spears, a senior strategic communications major at the E.W. Scripps School of Journalism at Ohio University, attended the PRSSA 2012 National Conference in San Francisco with one thing on her mind: making a strong connection with someone from the renowned global public relations firm, Ketchum.

“Ever since visiting the Ketchum Chicago office on a networking trip with my PRSSA Chapter as a sophomore, my sights have been set on the agency…I resorted to the Twittersphere,” Spears said.

Inspired by the PRSA Conference keynote, Biz Stone, CEO of Twitter, Spears tweeted about her hopes of connecting with Ketchum. That was when Bill Zucker, Midwest Director of the agency, made the suggestion of holding up a sign. Spears pushed her fears aside and made her way to the front of the audience, sporting a yellow legal pad with “Ketchum?” written on the front. Coming to the disappointing conclusion that no one had noticed, Spears headed to another section of the Conference audience and almost bumped into someone she thought was about to throw her out.

“A quick glance at his highly decorated nametag notified me otherwise. In other words, the first time I met Rob Flaherty, Ketchum CEO, I thought he was a security guard! Instead, I exchanged cards with one of the biggest industry influencers in the room.”

Spears suggests attendees of the 2013 National Conference keep the following in mind when seeking-their own life-changing opportunities:

“Innovation can play out in many ways. From the intricacies of award-winning campaigns, to the basics of networking, bold creative tactics guarantee a lasting impression. Go bold, or go unknown.”

Get the whole story from Nicole herself by reading her post on the Ketchum Blog.

How much networking do you plan on doing at the PRSSA 2013 National Conference? Do you have any “bold and creative tactics” in mind to catch the attention of those you want to connect with?

Get the latest news and updates about this year’s Conference by liking the PRSSA 2013 National Conference page on Facebook and following the event on Twitter @prssanc.

New! Check out the PRSSA 2013 National Conference promotional brochure for more details about what’s in store for your visit to Philadelphia.

Jessica Howard is a sophomore at Drexel University. She is pursuing a Bachelor of Arts in communication as well as a minor in fine arts. Howard is the communications director for the PRSSA 2013 National Conference.