Session: Becoming the Change: Rising from Tragedy to March for Our Lives

Recap: Brendan Duff and Delaney Tarr took us through the story on how the March for Our Lives Movement started. They weren’t there to explain what happened to them or how they felt about the horrific day of the school shooting. Instead, they educated us on how important it was for them to control the message being displayed in the media and making sure the goal of their movement was apparent.

Duff and Tarr were very transparent when explaining the struggles they faced throughout this movement. One being voter registration laws since these are controlled on a state-by-state basis. They had to alter their voter messaging to apply to individual states continuously. Another struggle they faced were people having the wrong idea of their movement because of the words gun reform.

Lastly, they emphasized the importance and need for “Art”ivism because it speaks to young people and goes beyond language and class. It gets people engaged creatively and innovatively. 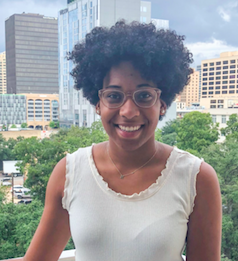 Russia Boles is a junior public relations student at the State University of New York at Plattsburgh. She is the PR Director for the SUNY Plattsburgh PRSSA chapter and the social media manager for her student-run firm Cardinal PR. She loves fashion and is also a huge foodie. Follow Russia on Linkedin.