The PRSSA National Conference is the closest thing the public relations industry has to a super bowl.

Featuring an all-star cast of guest speakers from the likes of Southwest Airlines, IBM and SXSW and wrapped up in one of the country’s coolest cities, this year’s Conference certainly won’t disappoint.

So, as your PRSSA 2018-2020 National Professional Adviser— whose sole mission is to make sure you develop into an outrageously successful professional — you should do everything in your power to attend.

I was recently at a wedding and you know what blew me away (besides the beauty of the bride and groom)? The volume of PRSSA contacts in attendance.

Two living legends, countless thought leaders and more rising stars than you could challenge to a dance-off.

The groom had built these connections at one of several attended National Conferences. These are his mentors, his colleagues and his closest friends. And these connections have made the difference in his career and life.

Attend National Conference and you might very well have a similar story.

You’ll have the opportunity to meet peers from across the country and world, not to mention professionals at every turn.

And networking isn’t as hard as you think — showing up and saying hello is half the battle.

National Conference is a summit of the most current ideas from our industry. The speakers are established, knowledgeable and full of wisdom.

You’ll be exposed to ideas that will literally change the way you fundamentally think. 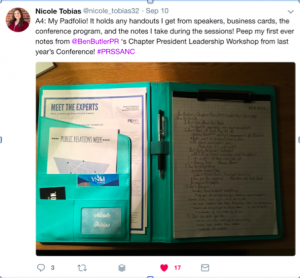 By attending PRSSA National Conference, you get access to PRSA’s General Session at no additional cost.

It’ll be a combination of PRSSA and PRSA members basking in knowledge from two, big-time speakers. Can you picture anything more poetic?

And if you’re struggling to find a road to Austin, try one of the following options:

Top Hat is widely known for its Silver-Anvil-winning “Will Work for Beer” campaign, where the agency offered to work for one brewery entirely in exchange for beer. The effort scored Lord Hobo — the fastest growing regional craft brewery in the country — as its first beer client. It also positioned the agency as a go-to for craft beer marketing attracting the likes of Pittsburgh Brewing— one of the oldest breweries in the country.

Ben’s been named a Top Under 40 Communicator, Pittsburgh Business Times 30 Under 30, PR Entrepreneur of the Year, one of Spin Sucks 10 PR Professionals to Follow and is Accredited in Public Relations (APR)—a distinction held by less than 20-percent of all practitioners.