City Series: Live and Work in Detroit for a High Octane Career 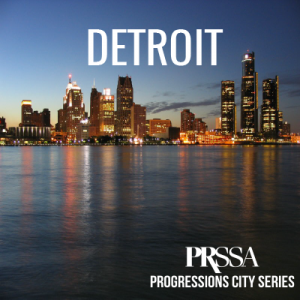 Detroit is a public relations professional’s playground. As a native, I’m happy to share the many reasons new professionals should consider opportunities in the ‘Motor City,’ both from a career and quality of life perspective.

Because of the large number of Fortune 100 companies, particularly within the automotive industry, the public relations profession has grown up in Detroit. In fact, General Motors was the first corporation to name a vice president of public relations when President Alfred Sloan hired former business journalist Paul Garrett in 1931.

Having spent 30 years at General Motors in several communications roles, I recommend automotive communications careers. Car companies have well-known consumer brands and the industry drives the global economy, which makes for a fast-paced and diverse career. One of the benefits of working for a large corporation is that they typically have 100 or more internal public relations professionals so you gain experience in several disciplines including: internal, marketing, crisis and executive communications, as well as media relations, issues management and social media.

More than 60 percent of the top 100 North American automotive suppliers are headquartered in Michigan. Automakers and suppliers receive support from a myriad of public relations agencies. Nearly every major global public relations agency has offices in Detroit. Solo practitioners and small agencies also are plentiful in Detroit. The expansiveness of the industry has attracted nearly every national media outlet to create a Detroit bureau.

While Detroit is synonymous with cars, other key industries include healthcare, energy, sports, countless nonprofit organizations and education.

The city is becoming known as a technology hub rivaling Silicon Valley, especially with the blossoming connected vehicle industry. In fact, according to the Michigan Economic Development Corporation, Detroit has one of the most skilled workforces in the country, graduating more engineers, per capita, than anyplace else in North America.

Metro Detroit professionals have a strong professional network outside of the office. The PRSA Detroit Chapter is the 12th largest with 350 members. It was established in 1945 and is one of six founding Chapters. Anyone considering moving to the area should visit the Chapter website for job openings and events. The Chapter has an affinity for supporting students and new professionals, and has awarded more than $74,000 in scholarships to PRSSA students in the state of Michigan since 1993.

Detroit borders Canada and is separated by the Detroit River, with a beautifully renovated riverfront. The city is culturally rich with more than 30 galleries, 20 theater and performance venues and nearly a dozen museums, not to mention four national sports teams.

The city is also ethnically and racially diverse and has a robust immigrant community. If you’re a foodie (and who isn’t?!) Detroit has a vast and renowned restaurant industry. In fact, early this year, National Geographic named Detroit one of the six unexpected cities for food lovers — the only city in North America to receive this designation!

Michigan has four beautiful seasons as well as Midwestern hospitality and kindness. According to the Council for Community and Economic Research, the region’s cost of living is nearly 5 percent below the national average, making it an affordable place to live. As far as recreation, Michigan has 11,000 inland lakes and the nation’s longest freshwater coastline. There’s always a new place to explore on the weekend.

Detroit’s Midtown district is home to Wayne State University (WSU), a leading research university in the heart of the cultural district. It’s where I first joined PRSSA in 1984, and later received two communications degrees.

“What I love about working in Detroit as a new public relations professional is that you not only get to experience the unique growth of our city, but you get to be a part of it,” said Amanda Knaebel, 2015–2016 WSU Chapter president and communications associate at DTE Energy. “Detroit’s comeback story is unlike any other, and as a communicator, you get to help write that narrative.”

Similarly, 2002–2003 WSU Chapter vice president Peter VanDyke said, “One aspect that I have always found to be unique to Detroit, and a huge benefit to my career, is access to people and resources. While we have big business in Detroit, it is very much a small town. As an agency owner, and even when I was a junior public relations executive, I found that you could have access to C-suite level executives much easier than you might in a New York, LA or Chicago, where the competition is greater and there are more layers and barriers between you and a ‘higher up.’ It is not unusual for me to be in a meeting with the Mayor of Detroit, or to easily be able to call a foundation head or be connected to the CEO of a major company.” He is now the CEO of VanDyke – Horn Public Relations.

On behalf of the PRSA Detroit Chapter, we invite you to join us and begin a high octane career in a revitalized city with countless opportunities for advancement and fun.

Mary Henige, APR, Fellow PRSA, is an ardent Detroit native having spent a majority of her career in the metro area. She was the 2003 PRSA Detroit Chapter president and co-chaired the 2008 PRSA International Conference, which was held in Detroit. She spent 30 years with General Motors in various communications and social media leadership roles. In 2015, she founded Magnetica Communications LLC and counsels CEOs on strategic communications, branding and social media. She has been the Professional Adviser to the James S. Measell Chapter at Wayne State University since 1993. Follow her on Twitter @maryhenige.