Planning for National Assembly in Albuquerque 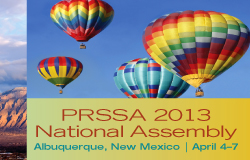 From April 4-7, representatives from PRSSA Chapters around the country will arrive in Albuquerque for the PRSSA 2013 National Assembly – marking the first time in more than 10 years that PRSSA has held a national event in New Mexico.

At Assembly, new and upcoming leaders from Chapters big and small gather to participate in programming to support Chapter officers, leadership development and networking.

For this year’s Assembly, the 2012-2013 National Committee will lead three leadership training sessions:

“Act Ethically and Carry On,” inspired by the PRSA and PRSSA 2012 Ethics Month theme, will review common ethical situations public relations practitioners may face in the field and discuss the challenges of acting ethically. The session will also focus on how to present ethical case situations to Chapters to use for open discussion.

“Spreading the Word” will help Chapter leaders become more familiar with the many resources and benefits PRSSA provides as a national organization. By focusing on efforts to communicate member benefits and resources to Chapters, this session will prepare leaders to be most effective in this endeavor.

In “How to Plan a Sensational Semester,” leaders and members will learn how to create long-term strategic plans for their Chapters. The session will also discuss methods for generating new ideas and collaborating with other organizations across campus to help maximize the quality and effectiveness of Chapters.

The PRSSA National Advisers and PRSA Board Liaisons will assist the National Committee in leading this vital part of National Assembly.

“National Assembly is an opportunity for the commitment, passion and creativity of PRSSA students to shine,” said Don Egle, APR, ABC, 2012-2014 National Professional Adviser. “The involvement of each PRSSA Chapter is important and fundamentally necessary to the smooth transition of National PRSSA leadership and Society governance.”

Is your Chapter sending a delegate to National Assembly? Remember: PRSSA will cover the registration and hotel costs for one delegate from each Chapter. Additional Chapter members may also attend National Assembly as non-delegates.

Make sure your Chapter is represented at National Assembly – register by the deadline of Feb. 25.

This is a guest post written by Lauren Gray, the PRSSA 2012-2013 National President and a junior account executive at Hunter Public Relations. Follow Lauren at @laurenkgray.

1 thought on “Planning for National Assembly in Albuquerque”