Why You Should Attend the PRSSA 2014 National Assembly 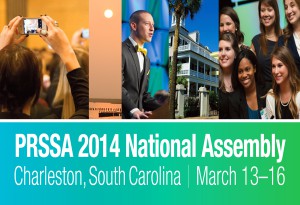 The PRSSA 2014 National Assembly is an event dedicated to leadership training and Society development. The Assembly gathers each spring to also make influential, long-term decisions about the future of the Society, elect a new National Committee and review the bylaws. This year’s Assembly, March 13-16 in Charleston, S.C., is one that promises to provide an impactful experience for attendees. There’s a lot to know, but here are my top reasons why you should attend National Assembly.

Leadership Experience
National Assembly has a long-standing tradition of being the breading ground for the following year’s leaders. Develop your style and thought process as a leader throughout the Assembly, the program includes sessions on leadership discovery, leadership communication and the integrity of a leader. Attendees can also learn from those running for the PRSSA National Committee during Saturday’s election of the 2014-2015 national leaders.

Cost
This event at this price cannot be missed. Delegates have their hotel covered by PRSSA and their registration fee waived. Are you kidding? That’s a deal that can’t be turned down. Registration for non-delegates is only $60. When you break it down to dollars, National Assembly just adds up.

Day-of Competition
Sign up to be part of the Day-of Competition, where small teams have one hour to put together a full-scale public relations campaign for a client. The campaign is developed in a fun, fast pace, competitive environment and the winning team receives a prize!

Charleston
Charleston, S.C. is famous for its rich history, charm and tasty cuisine. The last three years, CN Traveler has voted Charleston the best city in the U.S., even claiming the number one city in the world in 2012. This coastal city will provide great opportunities for exploration and creativity.

Learn more by checking out the Assembly website’s frequently asked questions or by contacting National President Brian Price at brprice3@gmail.com. Your Assembly experience awaits you. See you in Charleston.